The well-being and health status of research mice is a top priority for experimental results and reproduction of data. The use of antibiotics and antiparasitics is a standard of care in veterinary medicine. They are used in laboratory animals to treat clinical diseases and protect populations that may be vulnerable to infections.

Oral administration of medication is an efficient alternative mode of delivery and is preferable for several reasons, including low stress to the animal and time efficiency for researchers and other laboratory personnel. However, some drugs can precipitate out when added to water, may be unstable and consumption can be low due to the undesirable taste of those medications.  This is especially true for drugs such as Bactrim® (sulfamethoxazole/trimethoprim) which can settle to the bottom of a water bottle.  Daily shaking is required to re-suspend the drug to ensure rodents are consuming a consistent, therapeutic dose.

The City of Hope in California tested the stability of trimethoprim (TMP)-sulfamethoxazole (SMX) in 3 different conditions through the standard water bottle:

Water bottles filled with these solutions and accompanying medications were positioned in empty mouse cages. Samples from the solutions were then collected at 0, 4h, 8h, 24h, 48h, 72h and 7 day time points to mimic the water the mice would be drinking from the end of the sipper tube. Analysis of drug concentration was conducted using High-performance liquid chromatography (HPLC).

The concentration of Trimethoprim remained stable in all three groups.  Sulfamethoxazole precipitated out of the RO and AW groups; however, it remained in suspension in the MediDrop® Sucralose group.

In parallel, in vivo results (graph below) show that mice on MediDrop® Sucralose administration had significantly higher blood concentrations of both trimethoprim and sulfamethoxazole at days 3 and 5 compared to the RO and AW groups.  This data demonstrates that MediDrop® Sucralose delivers a higher and more consistent therapeutic dose of both drugs. 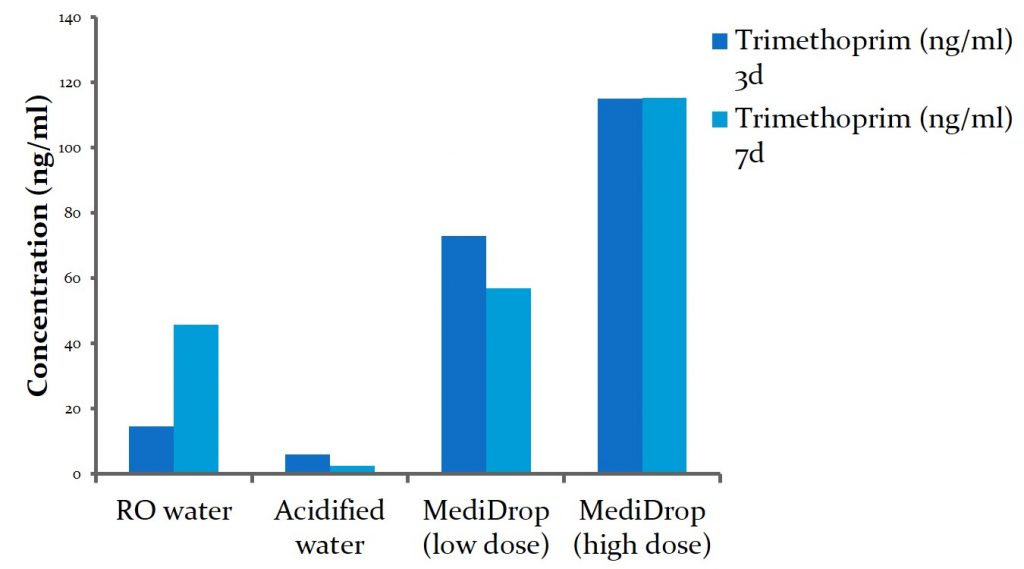 The MediDrop® Sucralose bottles were shaken once to mix in the respective medications and then left alone, whereas the regular water bottles with medication were shaken daily in order to keep the drugs in suspension.  Blood was collected from all groups via the submandibular method at days 1, 3 and 7 days after the start of drug administration, and blood drug concentration levels were determined. 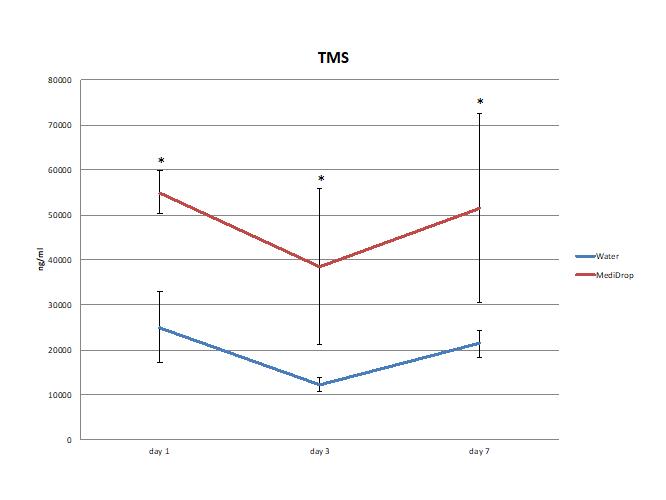 To try MediDrop® Sucralose, request a sample! Learn more about  our other medication delivery products on our MediGel® Sucralose blog and MediGel® Hazelnut blog.