The International Association for the Study of Pain defines pain in humans as “an unpleasant sensory and emotional experience associated with actual or potential tissue damage, or described in terms of such damage”. In animals however, while it is widely accepted that animals experience pain, pain is difficult to assess as appropriate methods of objective measurements are lacking (1). A general guideline is that any procedure that would reasonably be expected to cause more than slight or momentary pain and/or distress in a human should be considered a painful procedure in animals. This statement should be used with caution as differences in sensory abilities may exist in different species.

In laboratory settings, recognizing, minimizing and avoiding animal pain altogether is not only the ethical thing to do to improve the welfare of animals, it is also an obligation to adhere to the 3Rs regulatory guidance :

Untreated pain has confounding effects and can largely influence results variability and research outcomes on multiple biological functions (immunity, cardiovascular…), while effective pain management improves healing rates and decreases mortality, overall leading to better research (see our blog article Pain is a Variable that Affects Data Reproducibility). Untreated pain can also lead to weight loss and termination through humane endpoints, thereby loosing invaluable animals. To treat pain, different analgesics can be used (NSAIDs, opioids) and delivered through different methods (injection, fed, water, gels). ClearH2O’s gel products are an easy and effective method for medication delivery, reducing the stress of handling for the animal, and the additional pain of the injection, thereby increasing health and welfare. To learn more, read our studies: Carprofen/Meloxicam in MediGel® Sucralose and Buprenorphine in MediGel® Hazelnut.
TO TRY OUR MEDIGEL SUCRALOSE OR MEDIGEL HAZELNUT WITH YOUR ANIMALS
REQUEST A SAMPLE
In animal research, there are typically 5 circumstances that are likely to cause pain:
In most circumstances, pain is assessed based on an animal’s clinical appearance and overall behavior, or/and by examining their physiological and behavioral responses to noxious stimuli. More recently, the grimace scale, a standardized behavioral coding system accompanied by facial expressions, has been developed for a few species.

In 2010, Jeffrey Mogil and his group at McGill University, developed the mouse grimace scale (MGS) (2) where pain in mice is quantified according to objective and blinded scoring of facial expressions based on the Facial Action Coding System (FACS), as is done routinely for the measurement of pain in nonverbal humans. Indeed, mice and rats seems to display stereotypical changes in facial musculature that can be scored with remarkably high reliability and accuracy, using Advanced Video Coding High-Definition files Rodent Face Finder software.
Unlabeled photos are then randomized and analyzed for the 5 MGS action units:

Trained technicians then assign a score to those 5 units, with the final MGS score being the average score across the 5 action units: 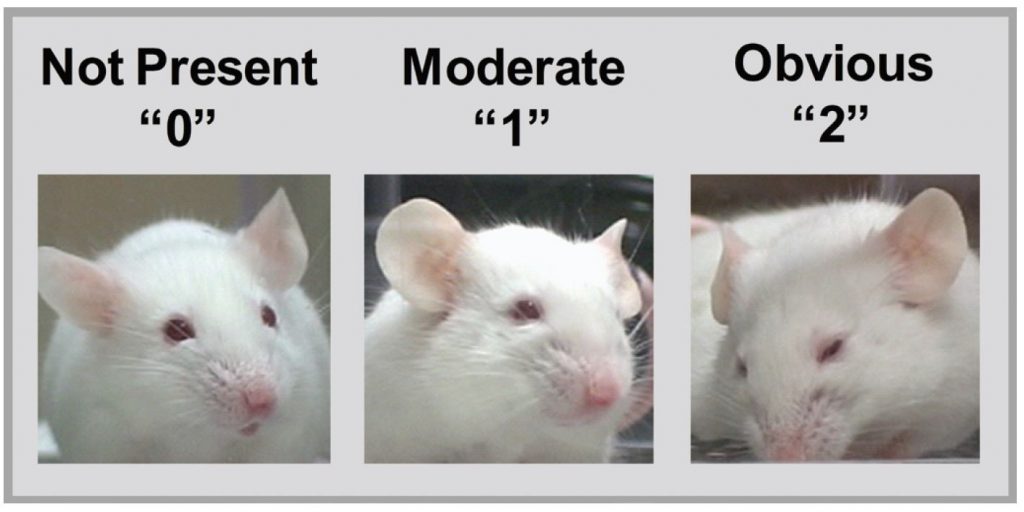 Since then, the MGS has been used to measure pain in a variety of circumstances, such as postoperative analgesics efficacy, post-vasectomy pain, thoracotomy and experimental myocardial infarction, laparotomy, orofacial pain, neuropathic pain and much more. Currently, two groups are working on a semi-automated MGS scoring system (Tolba’s and Belik’s in Germany).

In 2011, Jeffrey Mogil and his group adapted the MGS to better fit rats and developed the Rat Grimace Scale (RGS) (4). They noticed that, in the presence of pain, the nose and cheeks of mice bulge, while they flatten and elongate in rats and always occur together. Thus, the 4 action units of the RGS are:

In 2012, in a collaborative effort between University of Guelph and Newcastle University (5), a scale to assess pain in rabbits based on changes in facial expression was developed, and composed of five facial action units: 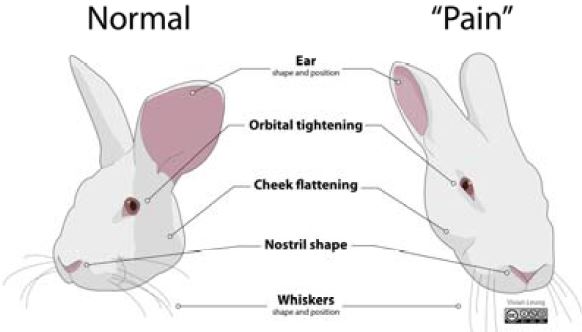