When designing experimental studies, many diet options are available and often overlooked. However, diet plays a crucial role, and can add a confounding variable and influence your study results. Let’s compare your options and discuss the advantages and disadvantages of each.

Standard diets, or “chow”, meet the broad objective of providing nutrition to your animals as different formulations can respond to a variety of stages or needs (growth, maturity, reproduction, aged…). However, they do contain complex ingredients such as ground corn, wheat and soybean meal that are closer to poultry and livestock diets than rodent food. The common main ingredient is generally wheat, which is a good source of carbohydrates, but also contains fibers, proteins and fat, very similarly to oat and corn.

Standard diets are composed of rich and complex ingredients that also contains non-nutritional components. For example, soy or alfalfa is often used as the protein source in standard diets. Both contain phytoestrogens notably isoflavones that are structurally and functionally similar to mammalian estrogens (1), and can provoke a variety of unwanted effects influencing experimental results. Alfalfa also contains chlorophyll, which can interfere with the imaging of many fluorophores (such as GFP or Alexafluor 650 and 680), commonly used in fluorescence imaging technologies, producing a background “noise”, and making quantification of true signal difficult.

Check out the POSTER by N. Patel: Effects of Dietary Supportive Care on Bioluminescent and Fluorescent Imaging in Mus musculus

Standard diets also typically contain very high levels of both soluble and insoluble fiber coming from multiple sources. The exact formulation of standard diets is proprietary: formulation and ingredients show vendor-to-vendor variability and can change from one batch to the next, depending on the ingredient market price and availability (2).

On the other hand, purified diets contain semi purified, refined and/or synthetic ingredients, that are simple and easily digested. Each ingredient used belongs to only one of the 4 nutrient classes (see graph below), such as casein (protein), corn starch (carbohydrate), soybean oil (fat) and cellulose (fiber), allowing complete control over the nutrient composition. They contain little to none non-nutritional factors and very limited fiber, unless it is added.

Purified diets should not be autoclaved as the very high temperature affects the form (ingredients clump together, high fat melt) and the stability of nutrients (especially vitamins A, B and E) (3). They can be irradiated via gamma rays, electronic beam or X-rays. However, irradiation does not guarantee sterility. Larger microorganisms such as bacteria, mold, fungi and yeast are more sensitive to low level of irradiation, while viruses (such as parvovirus and norovirus) are less sensitive, and irradiation might not be able to prevent infection if the feed had a high viral load to start with. Test and evaluate diets to ensure it meets your standards!

In 1976, a committee of nutrition researchers, the American Institute of Nutrition, develop a fixed formulation for purified diets that we know today as the AIN-76A diet. This formulation was revised in 1993 to produce the AIN-93 diet.

Effect of Diet on Microbiota

Gut microbiota is gaining a lot of attention lately as it has been associated in humans with a wide range of diseases: metabolic disorders (obesity and type 2 diabetes); autoimmune diseases (inflammatory bowel disease, type 1 diabetes, rheumatoid arthritis and allergies); cancer; neurodevelopmental disorders (autism). Mouse models are largely used to study those diseases, however human and mouse gut and their microbiota differ in many ways. Humans and mice share a very similar gross anatomy of the gastrointestinal system, with major differences: humans have a smaller cecum and colon and relatively longer small intestine compared to mice, and the human colon is divided into small segmented pouches while the mouse colon is smooth (4). 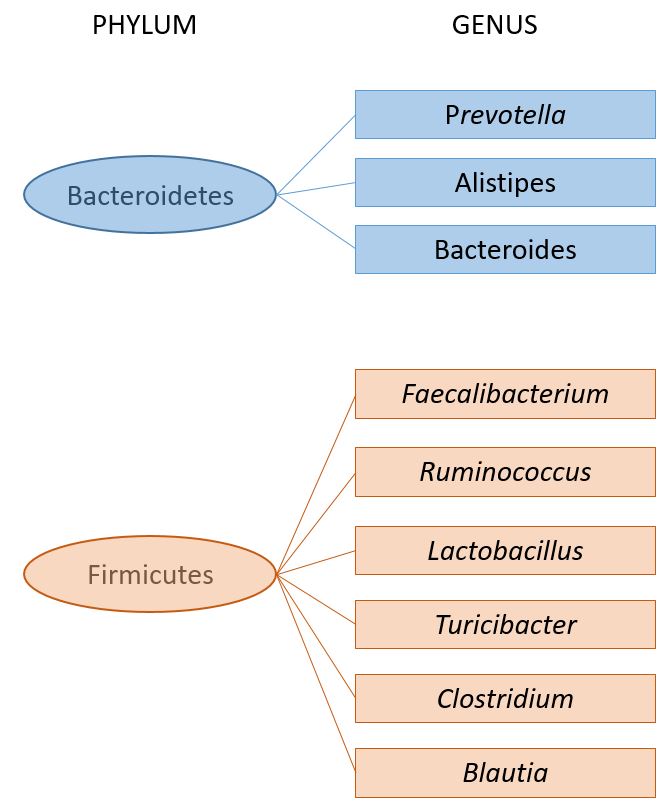 Overall, the gut microbiota of human and mice are dominated by two major phyla, Bacteroidetes and Firmicutes, but the relative abundance of the different genera in human and mice differ. For example, Prevotella, Faecalibacterium and Ruminococcus are higher in humans, while Lactobacillus, Alistipes and Turicibacter are higher in mice, and Clostridium, Bacteroides and Blautia have a similar relative abundance in both organisms (5). Diet and nutrient intake play an important role in the diversification of the gut ecosystem. Different enterotypes (groups of specific microorganism) have been described in both humans and mice, and are largely influenced by long-term diet. For example, Prevotella is related to carbohydrates and simple sugars (plant based diets), while Bacteroides is associated with proteins, amino acids, and saturated fats (animal products centered diets) (6).

Diet, especially fibers, is critical to gut health. There are two types of fibers: insoluble (such as cellulose) and soluble (such as inulin). Gut bacteria feed on fiber by fermenting soluble fiber (whereas insoluble fiber is largely not fermentable) and releasing short chain fatty acids (SCFAs), which provide many health benefits. In addition, SCFAs help reduce the amount of pathogenic bacteria in the gut by changing the gut pH. Intestinal bacteria also play a role in synthesizing vitamin B and vitamin K. It is very important to understand that fiber content in the diet highly influences gut microbiota and health, and can produce changes in the animal phenotype. Always use the same diet for your control and experimental groups, and never compare a standard with a purified diet. For example, replacing cellulose with inulin in a high-fat diet restores intestinal health and protects against hyperphagia and increased adiposity (7). Therefore, supplementation of various diets with soluble fiber will promote intestinal health and protect against low-grade inflammation that drives adiposity.

Casein is used in many rodent purified diets as the source of protein. However, the extraction process from cow’s milk can be a source of contamination, notably by Lactococcus species, and can introduce many confounding factors (8).

FUN FACT: cow milk is made up of two different types of proteins, whey  (20%) and casein (80%). There are four types of caseins (αs1, αs2, β, and κ, the only calcium-insensitive casein), and each type has different genetic versions. There are two major genetic variants of β- casein: A1 and A2. Almost all American, Australian and European (except French) cows produce milk with mostly A1 casein (Holstein, Friesian, Ayrshire, and British Shorthorn breeds). Cows in Asia, Africa and France produce milk with mostly A2 casein (Jersey, Guernsey, Normande, Brown Swiss, Charolais, and Limousin breeds).

The amount and form of dietary casein have been shown to affect energy metabolism and lipid accumulation in mice:

In summary, when designing an experiment or study, diet is an extremely important variable that should be given some attention. Consider what your needs are, what your goal is, and customize your diet to best fir your research. To try ClearH2O products, request a sample !

Read our microbiota blog series:
Solutions for your Germ-Free and Gnotobiotic Mice
The Importance of Gut Microbiota in Reproducibility and Translatability in Research
The Role of Diet in the Gut Microbiota: Standard vs. Purified Diets