According to Biology of the Laboratory Mouse, Chapter 4, by Edwin Les (1), “Animal husbandry is the applied science of providing an optimal environment for a population of animals.  The practice of mouse husbandry encompasses all of the activities necessary to produce mice of high quality”. This includes the facilities, cages, cleaning and sanitation procedures, equipment, bedding, food and water.

Water delivery systems in a vivarium

Water is essential to sustain life and it is important to recognize the importance of the water quality and the reliability of the water supply systems on the health of the animals and the reproducibility of experimental research results (2). Whether water bottles or automatic water systems are used, water purification (by methods such as filtration, irradiation, steam sterilization, acidification and chlorination,etc. ) is important to remove particulates, as well as chemical and biological contaminants (such as Trihalomethanes, salmonella, norovirus). Reverse osmosis (RO) systems produce a pure water that has been adopted as standard in the pharmaceutical world.

However, in some emergency situations where water is not available for a short period of time, such as water outages, pipe replacement, transfer to a new water system (3), an alternative water source is needed during that time. Taking preventative measures to ensure newly arrived research rodents adapt appropriately to automated watering can save time and valuable research animals. Adding HydroGel® or a similar alternative to traditional water as a backup supply is necessary to protect the health and welfare of valuable research animals.

That is the kind of situation that Dr Cynthia Lockworth, DVM, DACLAM, Associate Professor at MD Anderson Cancer Center – University of Texas, had to face in 2019, when the piping in her facility needed to be replaced and repaired. Her nearly 20,000 mouse cages would be without water for 4 days, needing an alternative source of water for the animals. This was not the only time that Cynthia witnessed an emergency situation: Houston experienced a water main burst in Feb 2020 (4) shutting off water supplies in businesses, schools and universities. Many other animal research facilities have or will experience similar situations.

“I knew right away that the need for an alternative water source was not unique”
says Cynthia.

“ClearH2O gels are the bread and butter of basic treatment”, says Cynthia.

Cynthia personally performed an IACUC approved trial with training mice, providing the two alternative gels to assess for application, visualization, consumption by strain, and gel duration.   Three strains of mice were used in the trial for comparison: C57Bl/6J, CD-1 and Nudes. An “X” was cut into the pouch outer film and the pouch was then placed on the bottom of the cage. A strain difference was noted, with CD-1 smelling and consuming the gel rapidly, while B6 mice approached the gels tentatively and consumed less initially. To improve consumption by B6 mice, a complete flap of the packaging film was cut out and removed for easier access of the gel for the mice.

Subjectively, her assessment of application of the gels found that HydroGel® was preferable for application into cages.  It had a firm consistency compared to the jello-like and soft feel of the alternative gel, making the process of cutting easier and safer for personnel. HydroGel® rectangular pouch format was ideal to handle and allowed for less exposure of gel to air.

Additionally, a timed trial was performed to determine the amount of time needed to cut and place the gels into cages, with the intent of ensuring that there were adequate personnel.  It was determined that two-person teams with current staffing would be sufficient to cut and apply gels in all cages on a single day.

The week before the water supply outage, half the cages in the facility were changed and only spot changes of heavily soiled cages were performed the week of the outage, after health checks, as priority was given to hydration monitoring. Approximately 2,000 cages with sensitive mouse strains (GEM, NSG) with other species (rats, hamsters) or cages needing special attention (breeding units, medicated cages) received a water bottle. Cage wash technicians were recruited to cut gels as there were no cages to wash that week. The gels were precut at the room and suite level and applied in one day to all the cages by assigning 2 technicians per room, totaling ~18,000 cages.

A refresher training on how to monitor for dehydration was provided and the algorithm below was put up in every room to provide easy guidance for technicians. If dehydration was perceived by the technician, a cup of DietGel® 76A was added to the cage. 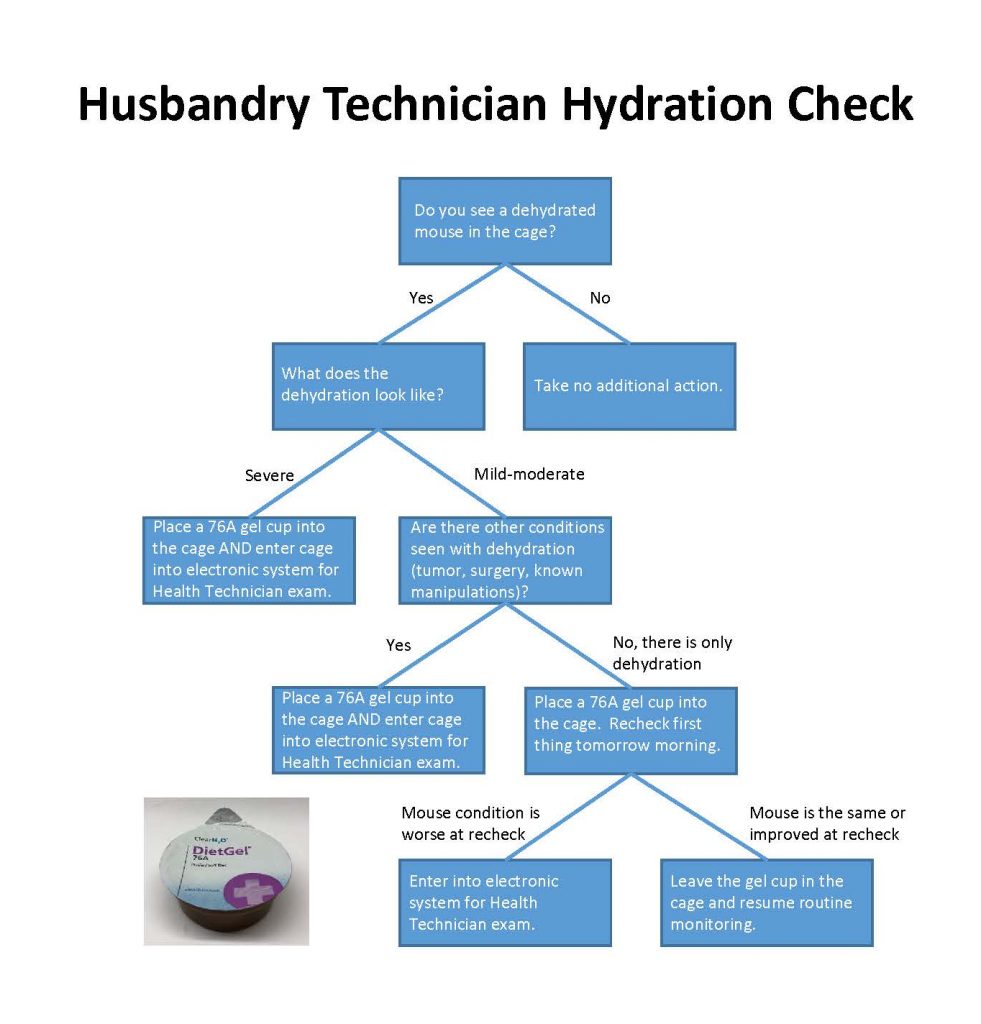 Data on dehydration, treatments, deaths as well as the technologists and researchers’ feedback were collected. Only 3% of perceived dehydration was observed, with a large number of those that seemed to be largely due to extra attention to newly weaned animals. No deaths were reported.

In conclusion, the water supply outage was navigated with minimal impact on the animals and HydroGel proved out to be very effective for future water supply outages and disaster planning. This work of invaluable importance was presented as a poster at the 2019 AALAS National Meeting, and as an oral presentation at the 2020 AALAS National Meeting and will be submitted for publication by end of this year.

Interested in more details from this study? download the poster:
Glass Half Full: Hydrating Mice Without Water